More than 1,500 kilometres of coastline bathed in silence and tranquillity. About 330 kilometres of which belong to the outer coast between the Fischland-Darß-Zingst Peninsula in the west and 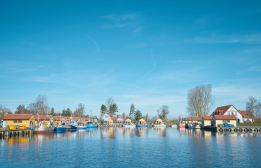 the Szczecin Lagoon in the east. With almost three times this figure, at 1,200 kilometres, belongs to the protected “inner coast” of the Bodden and Lagoon Waters. The rugged banks of the Bodden Waters, formed during the Ice Age, are less affected by wind, currents and surf than the graded shoreline of the Baltic Sea. 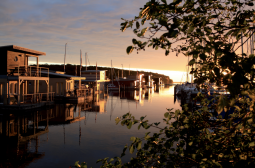 n which side of the border they live.

This is particularly evident on Usedom. One sixth of the 445 square kilometre island belongs to Poland, but there are no longer any barriers here. Only information boards reveal where one country ends and the other begins.

In the very west of Vorpommern, boaters can comfortably sail on the Barther and Saaler Bodden. They are now in the western part of the National Park of the Vorpommernn Bodden landscape, which stretches over 786 square kilometres from the Fischland-Darß-Zingst Peninsula to the island of Hiddensee. On the one hand, 80 percent of these are shallow lagoon-like Bodden waters under  the protection of Fischland-Darß-Zingst-Hiddensee and on the other, open coastal waters with the Baltic Sea in front of them.

The national park zones are crossed by buoyed fairways, which can be navigated all year round. Boaters find themselves able to get right up close to nature.

On sandbanks and on reed-lined shores, you can observe nature left to itself. Taking some shore leave is more than worthwhile, with Stralsund offering the Ozeanum as a new place of interest.

The Strelasund connects the western Bodden chain with the Greifswald Bodden, which in turn is connected to the Szczecin Lagoon via the Peenestrom and Achterwasser bay.

This Peenestrom River has an area of 300 square kilometres and is located on the inland side of the island of Usedom, which shows its placid side in this area. The sophisticated Imperial Baths (Kaiserbäder) and mile-long sandy beaches on the Baltic side are often only a narrow strip of land apart. On the “inland side”, smaller, quiet harbours are less than a day away. Where the German and Polish Szczecin Lagoon meet, newcomers to the area are always surprised by the vastness of their surroundings. After all, this coastal water is larger than the Germany’s largest lake, Lake Constance.

Water sports enthusiasts have plenty of space and usually enjoy perfect conditions, as the islands of Usedom and Wollin provide effective protection from the sea, which can often be rough. With an average depth of four metres, it can get a little uncomfortable in the lagoon when there are stronger breezes and short, steep waves. 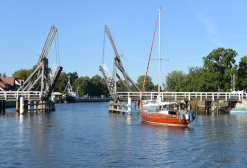 The latter belongs to the Polish part of the Szczecin Lagoon, the Big Szczecin Lagoon (Wielki Zalew), and comprises around 410 square kilometres. If you continue east on the Szczecin Lagoon, you will eventually end up in Poland and will only notice this from the different language being spoken on land. The border police rarely carry out random checks. Passing between German and Polish harbours is otherwise a completely smooth process. 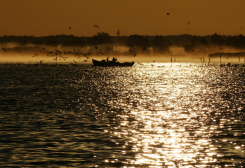 dary river, the Oder, leads through the Szczecin Lagoon around the two islands of Use dom and Wolin into the Baltic Sea.  Approximately 15 nautical miles from the estuary, the river flows through Szczecin. The city of 410,000 inhabitants is an ideal stopover for those arriving from Berlin. Many Berlin city dwellers take the waterway to get to the Baltic Sea by boat. Both the Oder-Havel Canal and the Finow Canal are suitable routes for reaching the Oder and its mouth. 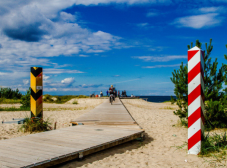 The east of Szczecin is also worth exploring: there are the national park and bird paradise with its untouched river branches and the al most unknown Lake Dabię (Jeziero Dabię).

The fourth largest lake in Poland is a widening of the River Oder shortly before its estuary mouth and begins in the city centre of Szczecin. Here, its many creeks lead into the open lake. Not far from the city of Police, the river leads back into the river bed and off into the vastness of the Szczecin Lagoon. 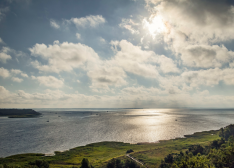 Nets as long as the Lagoon
The only obstacles in the lagoon are the many trawl and gillnets to the right and left of the buoyed fairway. Boaters should pay special attention to these. However, the nets are not only an obstacle to traffic, but above all a sign of the large fish population with pike-perch, bream, eel and herring feeling particularly at home here. Freest (on the River Peene), Stepnica (on the eastern side of the Szczecin Lagoon), Nowe Warpno (south coast of the Szczecin Lagoon) and Dziwnow (shortly before entering the Baltic Sea) are well-known fishing villages.

From Szczecin to Darłowo, there are 36 harbours to be found on the Polish side – the so-called West Pomeranian Sailing Route. They are located within 20 to 30 sea miles from each other and are conveniently reachable as part of a day trip. 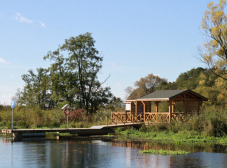 birds, plants, lakes, rivers and estuaries, islands in the early-morning fog and the sensational play of colors at sunset – the whole Bodden and Lagoon landscape is as excitingly varied as the weather.