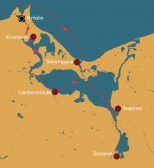 na of the Baltic Sea Resort to the aft and the Peenestrom ahead, the route passes into the southern Peenestrom fairway in the direction of Wolgast. The waiting time until the opening of the Peene Bridge (Wolgast) can be spent with a visit to Wolgast’s historical harbour directly in front of the old storehouse. A considerable promenade with cafés and restaurants invites for a stroll. The closest option in terms of mooring is Horn Wharf Marina. After the bridge, you must keep strictly to the fairway, as it becomes shallow to both the right and left. At buoy 72, the fairway leads into the Krummin Wiek. The natural harbour of Krummin is located at the end of the bay, opposite the Gnitz Peninsula. From here, the beaches of the Baltic seaside resorts of Zinnowitz or Koserow are best reached by bike.
Our tip: the Neeberg fish stand in Krummin.

From Krummin to the Zecheriner Bridge via the River Peene takes about three hours. The bridge only opens three times a day so this should be taken into account when planning your route. There is a small pier on the southern side of the bridge, where you can enjoy fresh fish at the Peene Idyll snack bar right on the small beach. 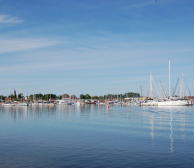 After the Peenestrom South H1 buoy, you can head south to the mouth of the river Uecker. The modern Marina Lagunenstadt (Lagoon City) Ueckermünde is located on the eastern side, in direct proximity to Ueckermünde beach. Travelling about 1.3 nautical miles along the Uecker, you reach the city harbour, where you can moor along the quay wall. The Pommernkogge (cog) Ucra, an old ship which is open for sightseeing, is located shortly behind the City Harbour Ueckermünde. For those travelling with children, the Zoo Ueckermünde might also prove to be a welcome destination

On this route, you leave the German side of the Szczecin Lagoon. There are no longer any border controls and registering in and out are things of the past now. However, there can be random checks every now and then, even many miles after the border.

Arriving from the Small Szczecin Lagoon, the first harbour on the Polish side to be seen from a distance is Nowe Warpno. It can be seen from the fairway, which soon branches off into the Oder. You now leave the Szczecin Lagoon (Zalew Szczeciński) – at the height of Trzebież – and continue to follow the fairway of the Oder. Via the western Oder, you then travel about 15 nautical miles to the centre of Szczecin. The western shore is characterised by industrial port facilities.

On the eastern side – at about the height of the island of Wielki Karw and the Policki Canal – a network of canals, islands and bays spreads out over reed-covered shores. The area lies between this course of the Oder and Jezioro Dąbie (Lake Dąbie), an extension of the Oder to an inland lake shortly before its mouth. The destination in Szczecin is the new NorthEast Marina, whose beach bar offers the very best view onto the Hook Terraces (Wały Chrobrego). During the season, a water taxi operates from here into the city centre. There are many bars and restaurants on both banks of the Oder and these act as a magnet for visitors and Szczecin’s citizens alike. 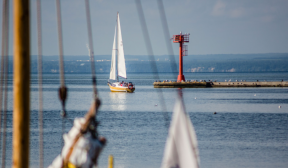 The next destination for the day is the small fishing village of Stepnica, just before the mouth of the Oder into the Szczecin Lagoon on the eastern side of the Oder in the bay of Zatoka Stepnica. From Szczecin, you must follow the fairway, which is shared with large cargo ships calling at the cargo port of Szczecin. The island of Wyspa Zurawia can be passed on both sides and through the quiet Sklowinski Canal. Continue along the right buoyed margin of the Oder fairway until you reach the bay of Zatoka Stepnica on the eastern side, where the Stepnica fairway soon branches off. On the northern shore is the Młyński Canal (entrance marked with a Polish flag) and this offers one of the two berths. The second is the Marina Captain Robert Hilgendorf, which is located next to the fishing harbour basin. There is also a filling station here. Directly next to the marina, there is a bathing beach which is separated from the harbour by a wooden pier.

Within walking distance in the village you find shops for all your daily needs. The approach to the harbour can be uncomfortable when there are westerly or south-westerly winds. Just behind the the harbour lies the highly recommendable Tawerna Panorama, which has a beer garden and a good choice of fish dishes. 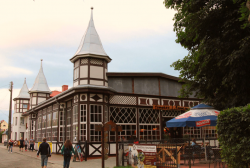 In Świnoujście, the destination is the protected Yacht Port North Basin on the Island Usedom by the western shore of the Świna, shortly before the mouth into the Baltic Sea. With rental bikes – available in the harbour – you can easily reach the centre with its lively beach promenade north of the city centre. The west of the yacht harbour is home to Fort Anioła and Fort Zachodni and on the other side of the Świna is Fort Gerharda. Close to it stands the tallest lighthouse on the Baltic Sea (68 metres) which now houses a museum.

You can leave the harbour of Świnoujście via the Świna. The route takes you along the outer coast of Usedom. Świnoujście, shortly after the silhouette of the distinctive pier of the seaside resorts of Ahlbeck, Heringsdorf, Bansin, Koserow, Zinnowitz and finally Karlshagen, can be seen off in the distance. 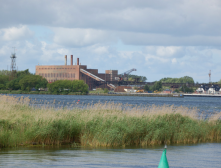 You now return to the fairway at the Peenemünder Haken and pass the Island of Ruden before entering the Greifswald Bodden, at the mouth of the Peenestrom. Ruden is today a designated nature conservation area and the small harbour is no longer open to boats. On the western side of the River Peene, the 5-star Marina Kröslin in the Baltic Sea Resort hoves into view.

Before this, however, you can make a small detour by boat to Peenemünde where you can moor in the town’s harbour. The Historical-Technical Museum in Peenemünde in the power station explains the history of the army’s largest testing facility, the former “Heeresversuchsanstalt”.

If there’s still time, why not take a bicycle tour to Freest, the small fishing village three kilometres away? Around the pretty fishing harbour, there are fish snacks to be enjoyed and a walk through the small pine forest gets you to the sandy beach.