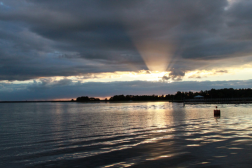 You first pass the Piast Canal in a southerly direction, then enter the Szczecin Lagoon and follow the water in an easterly direction. But beware, just before entering the bay of Zatoka Skoszewska, the northern edge of the fairway becomes very shallow. Also, further along, when entering into the Głęboki Nurt, which changes into the Dziwna, you must keep closely to the buoyed fairway. On the west bank of the Dziwna, a harbour basin with a depth of 3.5m has been excavated. To the north of it – directly in front of the new service building – floating jetties have been installed. If the wind is blowing from the east, there can be some swell. Here, you are directly opposite the Slavic and Viking museum settlement on the island of Wolinska Kepa, which is well worth a visit.

Once a year, usually at the beginning of August, the Viking Festival takes place here.

From Wolin, you head south through the Ciesenina Gleboki Nurt to the Szczecin Lagoon (Zalew Szczeciński) back into the fairway and then continue south towards the Oder. To the east, the fairway turns off to reach the fishing village of Stepnica. Whether you choose to moor in the main harbour along the Młyński Canal (entry left of the fishing harbour with the Polish flag) or in the newly built harbour directly next to the fishing harbour, which has a filling station, is ultimately a matter of taste and weather. The yachting harbour is located very close to the beach. In the nearby village, there are shops for all your daily needs. Entering the harbour can be unpleasant when there are strong winds from the west or southwest.Behind the fishing harbour, the Tawerna Panorama, which has a beer garden and serves up Polish dishes, is to be recommended.

The route continues to the city of Szczecin, to the NorthEast Marina opposite the Hook Terraces. The marina is located at the southern end of the island of Wyspa Grodzka. You circumnavigate the island, pass the pink-coloured police station  – which must be the most beautiful police station in the Baltic Sea – and turn into the marina on the south-eastern side of the island. A water taxi connects the harbour with the town centre. A beach bar opposite the Hook Terrace has opened in the marina. Along the new promenade, numerous bars and restaurants have been built to ensure a lively waterside promenade.

East of Szczecin, a trip to Lake Dąbie, which is an extension of the Oder, is a worthwhile experience for nature lovers. There are several marinas to choose from with the Marina Pogoń being the first of the six of these. Boats coming from Berlin f.e. along the Oder-Havel-/Finow Canal with a laying mast can have their mast placed here by crane.

Along the Oder, the route continues in the direction of the Oder estuary towards the Baltic Sea. However, a stopover in the Fishing Harbour Nowe Warpno, the westernmost on the Polish Szczecin Lagoon, is also worthwhile. To reach the harbour, you must pass the fairway between the island of Łysa Wyspa Zatoka and the German Altwarp. The harbour was only opened in 2015 and is located right in the centre of a small village. If the wind is blowing from south-east or the west, the berth can become rather choppy. In Nowe Warpno, the Argus restaurnt offers fresh fish dishes.

First take a course to the north-west. As soon as you reach the fairway in the middle of the Szczecin Lagoon, the route leads to the north-east, where the two huge red and green entry markers of the Piastowski Canal (Emperor‘s Channel) can soon be seen. It was built 140 years ago because the meandering Swine stream was constantly silting up. Today, it is the main shipping route past Wolin into the sea. After eight nautical miles, the destination is the charter base of the Yacht Port North Basin. In the evening, the Harbour Tavern is a good location for a farewell dinner.