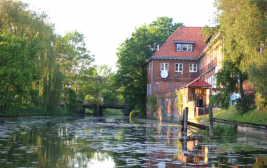 Looking to take an inland waterway from Stralsund or Berlin to Klaipėda? And then make the return trip across the open sea? Then the E70 International Waterway just might make this dream come true. The E70 forms a kind of bridge betweenWestern and Eastern Europe.

From Rotterdam or Antwerp, it runs via Berlin and the Wielkopolskie region to Pomorskie, through the Szczecin Lagoon to Kaliningrad and over the Pregolya and Deime Rivers to the Curonian Lagoon and to Klaipėda. 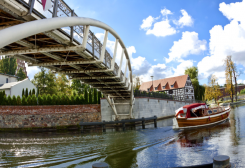 The Polish part of the E70 International Waterway starts about 80 kilometres east of Berlin and about 90 kilometres south of Szczecin, in Kostrzyn on the River Oder (Kostrzyn nad Odrą). The E70 includes 68 kilometres on the Warta and 187 kilometres across the River Noteć.  It then continues via the Bydgoszcz Canal and the Brda until it reaches the Vistula at Bydgoszcz. Via the Nogat, it then flows into the Vistula Lagoon and from here it reaches the Kaliningrad region. The International Waterway also includes the Szkarpawa, the Elbląg and the Jagiellonian Canal, which belong to the Żuławy Loop. 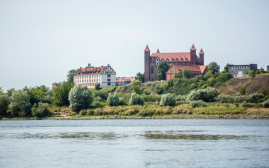 A total of 28 different water levels have to be overcome by means of locks along the entire route. Most of them date from the 19th and 20th centuries. The entire route usually has a water depth of 1.2 to 1.5 metres. However, some boat ers report much lower water levels due to drought, especially on the section of the route leading to Bydgoszcz.

If there were no more borders, the boat trip could even be continued with past the Vistula Lagoon to Kaliningrad and then via the Pregolya and Deima rivers to Klaipėda. A return journey could then be made via the Baltic Sea coast. In Russia, and especially in the Kaliningrad Region, much is being done to open the borders and waterways on Russian territory. Recently, boaters sailing under international flags have been allowed to navigate inland water ways. However, visa regulations are not the only hurdles. The infrastructure is no longer geared towards boat traffic. Bridge heights and water depths would have to be adapted to shipping traffic and the infrastructure in the harbours would also have to be expanded in order to appeal not only to those boaters with a pioneering spirit.

In Pomorskie – above all on the Żuławy Loop – a great

deal has been invested in infrastructure in recent years from Bydgoszcz northwards along the Vistula, the Nogat or the Szkarpawa to the Vistula Lagoon and as far as the Baltic Sea. From small, pretty and quiet harbours to city berths, boaters are presented with near-natural and friendly surroundings. Thanks to the commitment of the Voivodship of Pomorskie and the City of Klaipėda, the vision of continuous onwards passage will hopefully turn into real boating experiences in the near future.