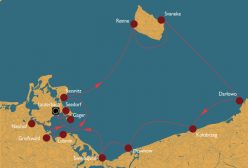 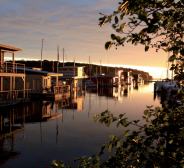 Greifswalder Bodden is to pass Vilm in an easter- ly direction but staying in the fairway to avoid the northern shallow water around the island of Vilm. This was once Erich Honecker’s holiday home and it is now a biosphere reserve. Another curiosity you might catch sight of when passing by is the disused demagnetisation station (N 54.325314°, E13.589434°), which lies to the east of Vilm. The Mönchsgut Peninsula is now left to the north. At the height of the Greifswalder Oie – only inhabited by a birdwatcher – a course north leads to Sassnitz. In Sassnitz there is much to see: the lighthouse, the submarine H.M.S. Otus (museum) and the spa architecture in the pretty old town. The East Prussian harbour smokehouse produces its own fresh smoked fish on a daily basis.

Rügen aft, Bornholm ahead, paradise in sight. The port with the shortest distance to Sassnitz is the Marina Nørrekås in Rønne and this is the desti- nation for this stage. Sailing conditions are particularly good when the wind pushes the yacht to Bornholm when there are prevailing winds from the southwest: it is the most beautiful Baltic sailing experience for more than 50 nautical miles! The Marina Nørrekås is located close to the town centre. There are many places and shops to stop for refreshments here. The Torvehal Market Hall, where local Bornholm produce is on offer, is the go-to destination if you want to get local and fresh produce for your onward journey. It is also worth knowing that, just like in almost every town on Bornholm, Rønne also boasts a culinary highlight. The Green Solution House is located about 2.5 kilometres east of the marina and offers diverse organic cuisine.

The south coast of Bornholm with its white beaches is particularly attractive. This stage starts in Rønne, at the westernmost tip of Bornholm, passes around the „South Cape“ at Dueodde and then to the gentle but rocky eastern side to Svaneke. The fishing village dating back to the 13th century is one of the most beautiful villages in Denmark (Winner in 2013). Bornholm is also the only region in Europe to have been awarded the title of World Craft Region for outstanding activities in the field of handicraft. In Svaneke, you can stroll through the ceramic, glass and textile studios and see for yourself how the World Craft Council came to a correct decision. 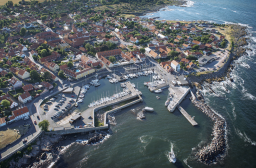 Enjoy the open sea all the way to Darłowo. In the event of north-westerly winds of 6 or more on the Beaufort scale, the sea can be unpleasantly choppy when entering the River Wieperza to reach the Darłowo Port. The harbour is located behind the retractable bridge, which opens hourly. There are also more mooring options at the Usteckie quay. Along the western quay wall, fresh fish is offered directly from the fishing boats.

The route leads back westwards along the coast until the mouth of the River Parsęta is within sight, but beware: in the event of westerly or easterly winds, there is a strong cross current. A bridge on the eastern side of the island of Solna connects the harbour with the town centre and the beach. In the harbour, above the harbour master‘s office, there is the Sailor Bar, which boasts a terrace and views over the River Parsęta and Baltic Sea estuary.

Continuing west along the coast, you soon reach the mouth of the River Dziwna and you target the two pier heads at control buoy DZI. Stormy westerly or easterly winds cause strong cross currents. Past the fishing port, the entrance to the striking, semi-circular marina comes into sight. The location between the river and the sea is typical for many places on the Polish Baltic coast. 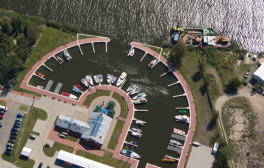 From Dziwnów to the west, you can reach the well-marked fairway with buoys and leading lights to Świnoujście. At the western pier head stands the characteristic mill beacon (Stawa Młyby). When heading for the marina, stay on the western side of the fairway. In Świnoujście, you are ideally located in the well-protected Yacht Port North Basin (Port jachtowy Basen Północny). Berths can be found on the floating jetties or alongside the quay. By making use of the rental bikes or walking, you can easily reach the long, sandy beach and the lively beach promenade. The quiet seaside resort of Ahlbeck, only 3 kilometres away on the German side of the island Usedom forms a contrast to the colourful Polish beach life.

the outer coast back to the Greifswald Bodden to the seaside resort Lubmin which is located on the south-east coast of the Greifswald Bodden. On approach, you should not let the electric power station put you off. Lubmin has its very own charm: the harbour at Lubmin is located directly next to the long, sandy beach that leads to the village and to the long Lubmin sea bridge. And behind this, there is an extensive pine forest. The harbour is home to the former passenger ship, the MS Vaterland (built in 1942 in Hamburg), which is now a floating restaurant offering down-to-earth cuisine.

the Danish Wiek (an ideal place for taking the sails in), you enter the mouth of the River Ryck and pass the barrage and the wooden bascule bridge at Wieck. The bridge has just closed? So, why not take a short break in here? A stop at the excellent Büttner´s restaurant is always worthwhile.

Over shorter distances, the following section of the route leads to the idyllic harbours and locations along the Strelasund and the south coast of Rügen. It is a tranquil sailing experience and contrasts with the long stretches on the Baltic Sea.

Via the Greifswald Bodden and the Strelasund, you then reach the idyllic Marina Neuhof near Stralsund, at the entrance to Lake Devin opposite the peninsula bearing the same name. The Ziegelhafen restaurant directly in the harbour offers great views over the beautiful Strelasund landscape.

From Neuhof, take the Strelasund in an easterly direction. Caution: pay attention to the Glewitz car ferry, which connects Rügen with the mainland and goes back and forth between Stahlbrode and Glewitz. After passing the Garz peninsula and the island of Koos in the south, return to the Greifswald Bodden towards the northeast in the Rügen Bodden. Keep to the „Zicker“ buoyed fairway. The Mönchsgut Peninsula remains to the east of the Hagenschen Wiek fairway. Here, it soon becomes shallow.

The buoys are not lit, meaning that it is best to only visit the harbour during the daytime. With strong north-westerly winds, some swell can be expected in the harbour. From Gager, an approximately two-kilometre long foot or cycle path leads to the beach. Letting your gaze wander over the magnificent Bodden Landscape of the gently rolling Mönchsgut Peninsula is a real delight. The Fröhlich restaurant is popular with sailing enthusiasts.

On the way to Seedorf, again follow the fairway. Then turn east into the bay of the Having where there are several protected footbridges on both sides of the Lanckener Bek to the north of the Having. In the event of strong south-westerly winds, there is a strong current in the channel-like harbour and this makes it difficult to approach the boxes. 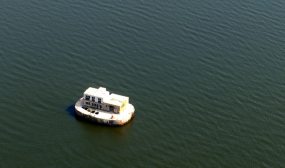 Via the Having, we head southwest towards Lauterbach. You must keep to the buoyed fairway as south of this, before Kasper Ort, it again becomes very shallow. To the northwest, you now enter Stresow Bay and pass the Ostervilm demagnetising station to the east. The route then steers clear of the eastern sandbanks of Vilm and follows the fairway buoys into the harbour entrance at Lauterbach. At the im-jaich marina, turn east. There is a filling station in the municipal harbour.