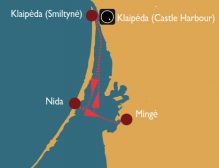 The tour starts in the charter base of Klaipėda, in the Castle Harbour. The first stage leads to Nida on the Curonian Spit, which is just before the Russian border. From Klaipėda Castle Harbour first head south into the buoyed fairway. Please note that passage between the mainland and the island of Kiaulès Nugaros is not permitted. 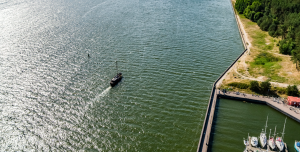 If the winds are favourable and are not blowing strongly from the northeast, a short stop is recommended at the Juodkrantė jetty. Juodkrantė is the oldest location on the spit and has been relocated several times in the course of its history due to the shifting dunes which have driven it further and further to the other, eastern side of the spit. On the 40-metre high Hexenberg dune (Raganu kalnas), you will be captivated by wooden figures and whisked away into a Lithuanian fairy tale world. From Juodkrantė, a passenger ferry will also take you to the other side of the lagoon, to Dreverna. The last third of the Klaipėda – Nida stage is the purest of natural experiences as the route leads along the dunes of the Curonian Spit. But especially in this section, due to the heavy silting up, you should pay attention to the fairway. Above all, because the fairway bends here and there in the last third, meaning that you run the risk of deviating out of the buoyed fairway. Entering the well-developed marina in Nida is unproblematic. If the wind is blowing from the northeast, a short choppy wave can build up over the entire length of the lagoon to the south. Around the harbour basin, cafés, restaurants and a ship bar have been established in the Nida Marina

and it is the last village on the Lithuanian side before the Russian border comes into sight after about two kilometres. Since the early 20th century, the town has developed into a lively seaside resort in a unique natural setting of dunes and forests. Thomas Mann spent three summers in his summer house on Usava Mountain. The Thomas Mann House in the colours of the traditional fishermen‘s houses is today a museum with a view of the Curonian Lagoon.

From Nida, the route leads to the opposite, eastern side of the Curonian Lagoon where the Nemunas Delta begins. Here, the river Atmath flows into the lagoon.  Before turning north into the River Minje on the way to Mingė, the village of Uostadvaris appears on the northern edge of the island of Rusnė. Uostadvaris is famous for its octagonal lighthouse which is 18 metres tall. Mingė is located on the Minja. The town was once well connected to the city harbour of Klaipėda via the Wilhlem’s Channel (Karaliaus Vilhelmo kanalas). However, the lock that has to be passed near Lankupiai is today only usable for small sport boats. Mingė is also known as the Venice of Lithuania because of its location on the water – many houses have been built on the right and left banks of the river. At a depth of 2.4 to 3 metres, the Minje is also easily navigable by larger boats – at least until Mingė.

From Mingė, the Minja again meets the Atmata, which flows into the Curonian Lagoon. The highly-visible buoyed fairway leads at a safe distance to the Ventė Cape (Ventės ragas) past the Ventė Peninsula and into the Curonian Lagoon. The lagoon is now crossed along the buoyed passage until the fairway – at the height of Prevalka – and again runs along the eastern side of the Curonian Spit. The sailing route then continues north along the fairway in the direction of Klaipėda. Attention: shortly before Smiltynė, the car ferry crosses the fairway. Large ferries and tankers will also keep you company in the fairway from here.

From the yacht club at Smiltynė, the promenade leads to the northern tip of the Curonian Spit. Here you can circumnavigate the „cape“ and take a beach walk back to the marina. The evening can be spent in the restaurant of the Smiltynė Yacht Club, watching the passing ships and strolling along the promenade.

Just crossing the Laggon and you reach the Castle Harbour, which is located at the mouth of the River Danė, which flows into the Nemunas. The former moat can also be used by guest berths. It is located directly in the centre of Klaipėda. The harbour basin can be reached via the swing bridge, which is opened manually every hour. Along the banks of the River Danė, numerous pubs, restaurants and cafés have been set up in one of Lithuania‘s oldest cities. The city centre with the Theatre Square and the restored Friedrich Passage (Friedricho pasažas, pasazas.lt) invites you to take a stroll. The Herkus Kantas sailing club with its local beer and small dishes is a must.