The Yacht Harbour Marina Gdańsk in the old town is the starting point for this tour. In order to leave Gdańsk, you must first pass the pedestrian drawbridge in the old town.

You then leave the Motława and turn east into Dead Vistula (Martwa Wisła), passing the Siennicki and Jana Pawla II Bridges. 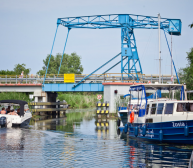 The next bridge is the drawbridge, which was completed in 2018 and connects to the island of Sobieszewo with the mainland and replaced the previous pontoon bridge. Before entering the Vistula (Wisła), use the lock in Przegalina and pass the drawbridge immediately afterwards. Head south along the Vistula to reach the next lock, Gdańska Głowa, which links the Vistula with the Szkarpawa. If the water level is very high, the lock can be closed. The swing bridge in Drewnica is opened on request. A short stop in the village of Drewnica is worthwhile. Here you can visit one of the few old wooden windmills.

The small village Rybina is a water junction: the River Szkarpawa, the Königsberg Vistula (Wisła Królewiecka) and the non-navigable Tuga meet here. The Vistula Lagoon (Zalew Wiślany) is 11.5 kilometres from here. Attractions here include the old revolving railway bridge, which is turned by hand and, in the summer season, the narrow-gauge railway from Nowy Dwór Gdański to Stegna. The swing bridge is then closed for half an hour for shipping traffic. Depending on the water level, the clearance height is then just 2.7 m. In Rybina, the day’s destination, it is possible to sample some Polish cuisine in the Swantewit. 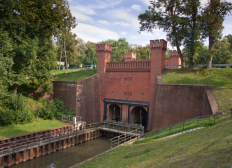 On the way to Elbląg and after passing the Rybina drawbridge, the journey passes the small pier in Osłonka. The route continues via the Jagielloński Canal, which was built in 1438 by its namesake and connects the Nogat with the River Elbląg. After about six kilometres, Elbląg is reached. The town, with its two historic drawbridges and the pretty, renovated old town with several churches, is itself worth a visit. We recommend the Restaurant Zmysły.

Upstream on this stage along the quiet, slowly flowing Nogat, at km 55.4 in Kępki, you have to pass the 3.3-metre clearance height of the fixed bridge.

You will also pass unnoticed over the voivodship border in the middle of the River Nogat between Pomorskie and Warmia-Masuria.

Apart from this: birds, reed beds and peace and quiet. This section is the purest experience of nature and curious relics of olden times appear again and again on the passing banks, such as the 16th century village of Wiercin.

The silhouette of the mighty 13th century Malbork Castle (Zamek w Malborku), the largest brick castle in Europe, is already visible from afar. The castle was once the headquarters of the Teutonic Order of Knights and is a UNESCO World Heritage Site. Those who visit it will get a glimpse of its eventful history.

On the eastern shore, shortly before the motorway bridge on the eastern Nogat side, you should moor in the small Pętla Żuławska boat harbour Park Północny or directly at passenger pier in front of the Malbork Castle.

For refreshments, visit the Gothic restaurant in the castle cellar after having paid a visit to Malbork Castle.

The next section heading to the destination of Biała Góra, accompanied by grey and white cranes, cormorants and lots of fish, is one of the most scenically beautiful on the route. There are two nature reserves along the way. 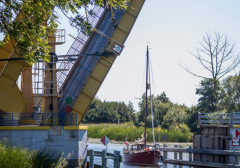 In Biała Góra, after climbing the historical lock, a view can be afforded over the  confluence of the Rivers Nogat, Vistula and Liwa. The huge “tower lock”, which connects the Liwa and the Nogat, is no longer in operation but is worth visiting. Today, the barrage consists of a chamber lock with a three-piece weir. It is used to protect the areas along the Nogat from Vistula flood waters and to increase the rate of flow of Vistula waters through the Nogat.

After passing the lock, we head north towards the destination of Tczew with a current speed of 3km/h towards the Vistula breakthrough. If the water level is low, be sure to watch out for groynes, which only become visible at the last moment.

The stone reef at Piekło is especially treacherous at low tide. In Tczew, just before the historical road bridge of 1858 and the railway bridge of 1888, is the quaint harbour. The approach to the marina is best made against the Vistula current.

Above the jetty there is the highly-regarded Przystań restaurant, which has a view of the river.

Błotnik can be reached again after passing the lock and bridge in Przegalina, turning south into the branch of the River Martwa Wisła.

The Baltic Sea, which is only about 10 kilometres away, can be enjoyed for a few days from here. Other options include a visit to Gdańsk.

On the way back to Gdańsk, the Wisła Śmiała (the Vistula breakthrough of 1840), formerly the only mouth of the Vistula into the Baltic Sea, branches off.

Passing the Polish Hook, we then cross the Motława River in the direction of th 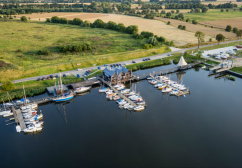 e old town, which is soon visible. After the new pedestrian bridge, which serves as a connection from the old town of Gdańsk to the island of Ołowianka with the Philharmonic, the tour ends at the Yacht Harbour Marina Gdańsk. It is located opposite to the famous landmark of Gdańsk, the Crane Portal.

Situated directly in the city port, the Restaurant Brovarnia, which has its own microbrewery, is worth a visit.