Before the tour begins, it is worth making a detour to Gdańsk. From the charter base in Gdynia, the route follows the „triple-city coast“ past Sopot with its long pier until the entrance to Gdańsk finally becomes visible. Via the harbour channel, a stretch of approximately 3 nautical miles via the Dead Vistula (Martwa Wisła) and then the Motława brings you to the Yacht Harbour Marina Gdańsk, which lies before the grandiose backdrop of the world-famous Crane Gate.

Gdańsk is a young and lively city. Pubs, clubs and restaurants line up next to each other and street musicians, festivals and markets set the scene. The beautiful old town and monuments, such as the St. Mary‘s Church, bear witness to the long German-Polish history. The Museum of the Second World War presents recent history in an impressive manner. The European Centre at Solidarność should also be part of the sightseeing programme in Gdańsk. 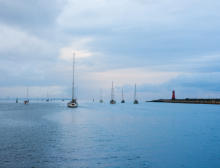 Before starting off in Gdańsk, you need to get clearance in the harbour if you are going to a non-EU country. This is usually done at the Westerplatte, shortly before leaving the Harbour Channel leading out to the Baltic Sea. The tour starts early in the morning from the Yacht Harbour Marina Gdańsk, in order to be at the checkpoint in Baltijsk in time. You first pass the pedestrian lift bridge in the city centre of Gdańsk.

Via the Motława, the Dead Vistula and the Portowy Canal, you pass the Westerplatte and after about 3 nautical miles you 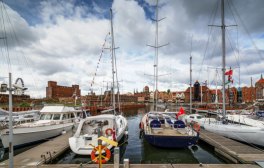 reach the open sea. To get to the border post in Baltijsk, you sail along the outer coast of the Vistula Spit (Mierzeja Wiślana). It is advisable to start sailing early in the morning and to calculate the  weather conditions, as the Kaliningrad Canal can only be navigated during the daytime (between sunrise and sunset). As soon as you have reached Russian waters and are approaching Baltijsk, you should follow VHF Channel 74 closely and ask for an entry permit from „Baltijsk Traffic“. In Baltisjk (near the container terminal, Berth 81), you are not allowed to moor, but must continue immediately after having obtained border clearance.Once you have completed the border formalities, you continue under steam into the 20-kilometre long Kaliningrad Sea Canal (sailing is not permitted). It is only open during the daytime (between sunrise and sunset). The top speed is limited to 25 km/h. The nearest harbour for sailing boats is the Yachtport Haydekrug in Wzmorje, which is located after about 14 nautical miles on the northern shore of the canal. The target depth is 2–2.3 metres but depends on the current water level. The centre of Kaliningrad is a 20-minute taxi ride away. Next to the harbour you can find shops and restaurants.

From Wzmorje, you can easily reach the centre of Kaliningrad, which is of interest due to its special history. Kaliningrad Cathedral, the Kant tomb and the reconstructed fishing village are just some of the highlights. The nearby amber coast with the seaside resorts of Yantarny and Svetlogorsk is a local recreation area for residents of Kaliningrad and whole Russia as well as for guests from abroad. 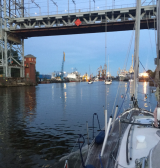 After 15 nautical miles into the Kaliningrad Sea Canal and a check-in in Baltijsk, we continue north, northeast to Klaipėda, which is 90 nautical miles away. Do not forget that if you come from a non-Schengen state, you will have to register for entry, or you will be summoned by the border guards via radio and obtain an entry permit. In addition, you will receive a radio message telling you whether clearance is being carried out at the port of destination or at the border station. The Smiltynė Yacht Club is located on the other  side of the shore, at the northern tip of the Curonian Spit National Park. It is connected by ferry to Klaipeda, which is located on the other side of the Curonian Lagoon. The yacht club boasts a restaurant and a hotel. From here, you can reach the beach by bike or on foot in 20 minutes.

The harbour day is suitable for a cycle tour along the Curonian Spit and to the northern tip, where it is worth visiting the Sea Museum and Dolphinarium along the way. In the evening, you can watch the passing ships in the restaurant of the Smiltynė Yacht Club and stroll along the promenade.

From Smiltynė Yacht Club, first head south into the buoyed fairway. Please note that passage between the mainland and the island of Kiaulès Nugaros is not pe 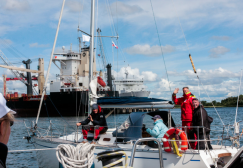 rmitted. You can make a short stop at the jetty at Juodkrantė. In the event of strong north-easterly winds, you have to be careful when mooring as the wind blows right onto the unprotected jetty. With 720 inhabitants, Juodkrantė is the second largest settlement on the Curonian Spit. Nearby is Hexenberg Hill on a 40-metre high dune. Today, there are more than 25 oak sculptures here, which have their origins in Lithuanian fairy tales. The last third of the route to Nida passes the dunes of the Curonian Spit – a unique natural experience. It is important to pay attention to the buoyed fairway. Entering Nida’s harbour is unproblematic. In the event of strong north-easterly winds, however, a short, choppy wave can build up over the entire length of the lagoon to the south.

Nida is situated on the Curonian Spit, only 2 kilometres from the Russian border. One highlight of this place is the unique dune landscape, which boasts the highest dune in Europe, the High Dune (Parnidžio kopa). From the viewing platform with its sundial, the view over the lagoon, dunes and open sea is overwhelming. From here, a footpath leads back to the harbour at Nida. Another highlight is the Thomas Mann House on Usava Mountain. The writer spent three summers here with his family and wrote the famous work „Joseph and his Brothers“. The writer is known to have appreciated the view over the lagoon from his terrace. 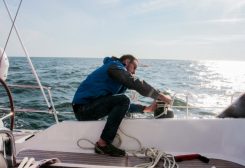 From Nida, the route heads northeast along the fairway back to Klaipėda. Car ferries cross the lagoon at the height of the ferry port. From now on you share the fairway with the big ferries and cargo ships. Shortly after the Smiltynė Yacht Club you cross the lagoon again. On the eastern side is the Castle Harbour. To reach it, turn into the Danė river. The swivel bridge for the entrance to the marina opens hourly.

Landside, it is worth exploring the mainland side of the Curonian Lagoon, preferably by hire car. At the extreme tip of the peninsula, at the Ventė Cape (Ventės Ragas), the beauty of this landscape becomes clear when you look over the lagoon and the dunes of the Curonian Spit. At the lighthouse, built in 1863, is the bird station, which was founded in 1929 and is an important resting place for migratory birds.

Observe the weather forecast and plan enough time for the long distance from Klaipėda to Sopot along the outer coast of the Curonian Spit and across Gdańsk Bay to ensure a relaxed sailing experience, especially when choppy conditions build up in Gdańsk Bay in the event of strong northerly and north-easterly winds. Afterwards, you can relax for a day or two in the  Baltic seaside resort of Sopot. Sopot Marina is located at the end of the 511-metre long wooden pier. It can be reached via a well-buoyed fairway.

The seaside resort of Sopot, with its many pubs and discos, is considered to be the nightlife mile of the triple city. The spa park and the long city beach are further attractions for tourists.

The proximity of Sopot and Gdańsk to Gdynia makes the three of them into a triple city. Right next to the large charter base is a city beach. The menu at the Sztuczka restaurant features light Polish cuisine.