From Greifswald heading towards Lubmin, you first pass the River Ryck and the Wiecker Wooden Folding Bridge. You then travel into the Greifswald Bodden via the Danish Wiek. Your daytrip destination of Lubmin is located on the southern shore of the Greifswald Bodden. The widely visible former nuclear powerplant serves as a landmark. Be aware of the many gillnets in the Bodden Waters.

The harbour in Lubmin is directly beside the long, shallow sloping sandy beach. A walk along the beach takes you to the village and the pier. In the harbour, you will find the former passenger vessel, the MS Vaterland, which is now a floating restaurant. 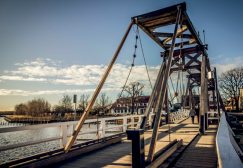 The western shore of the Peene River is home to the Marina Kröslin. It can be reached via the Greifswald Bodden. Keep free of the shallow Freesendorf Hook and enter the Peenestream fairway. Protected by the island of Großer Wotig you will find this five-star marina in the Baltic Sea Resort.

“Simply.Be” is the motto of the Baltic Sea Resort, meaning that you just get to stay there and indulge yourself in the wellness area, test the cuisine in the STEGhouse restaurant or in the tapas bar, go shopping or – if you’re in luck – enjoy whatever interesting event is on the programme at the time.

Starting from Kröslin, you head south along the Peenestrom. On this part of the route the Peene Bridge (Wolgast) must be passed. Wolgast is definitely worth a stop. The old market place in the town centre, the freshly renovated seafront and the old harbour are all interesting places to see. The route to the natural harbour of Krummin leads along the northern part of the Krumminer Wiek on the island Usedom. The harbour can be entered via the buoyed fairway and this should pose no difficulty. During the summer months, small theatre performances, music and barbecue evenings take place in Krummin’s natural harbour. Tip: Café Naschkatze in the village.

The Zecheriner Bridge, which was rebuilt in 1955, is located on this stretch of our route (closed clearance height: 6 metres). When planning your route, please take note of the bridge’s opening hours. On the southern side of the bridge, there is a jetty directly by the Peene Idyll hotel with a beach and freshly caught fish. Mönkebude, the former fisher village on the southern coast of the Szczecin Lagoon, is a well-protected harbour which also happens to have a nice beach. Close to the harbour in Mönkebude, the excellent Haffperle fish stand and various campsites can be found.

Along this route, you actually leave the German part of the Small Szczecin Lagoon, though with the border controls being long-gone, the helmsman will scarcely notice it. Coming from the west, Nowe Warpno is the first Polish harbour on the Podgrodzie Peninsula on the eastern coast of the Neuwarper See. Making your approach during the daytime is to be recommended as the fairway is only well buoyed as far as Altwarp. Attention: there is a lot of ferry and passenger traffic here. The quiet little town has a promenade and a small beach. German Altwarp lies directly opposite and ferry traffic connects both villages. The Restaurant Argus in Nowe Warpno serves fresh fish.

To get to Szczecin from Nowe Warpno, you leave the eastern Szczecin Lagoon and pass along the River Oder. Szczecin is reached in about 15 nautical miles. On the eastern side – at the height of the island of Wielki Karw and the Policki Canal – a labyrinth of canals, islets and bays spreads between the course of the Oder and the Jezioro Dąbie (Lake Dąbie). A network of idyllic water hiking resting places is being created here. The destination in Szczecin is the NorthEast Marina, directly opposite the Hook Terraces (Wały Chrobrego). During the summer months, a water taxi connects the marina with the town centre. The Marina beach bar is a real crowd puller. Many events take place here in the summer.

From Szczecin, the route first follows the River Oder with a northern course towards Stepnica. You have two options in terms of mooring: you can either choose the main harbour along the Kanal Młyński (entrance north of the yacht harbour, marked with a Polish flag) or the Yacht harbour beside the fishing harbour where you will also find a filling station. A wooden jetty separates the harbour and the beach. Behind the fishing harbour, the Tawerna Panorama with its beer garden is a good choice. 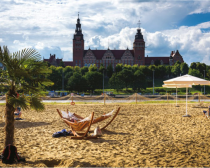 The route leads towards the Baltic Sea via the Oder arm of the Dziwna. Coming from the south, there are some bridges to be crossed. The first of these is the swing bridge just before Wolin, followed by two fixed road and rail bridges.

The Dziwna meanders along the island of Chrząszczewska towards Cammin Bodden (Zalew Kamieński). Keeping within the buoyed fairway is essential due to shallow waters to both the left and right. The indicated depth in the Marina Kamień Pomorksi is about 2.2 metres. Attending the organ recitals in Cammin Cathedral is recommended.

Crossing the Cammin Bodden and the bay of Zatoka Wrzosowsk, the route continues along the Dziwna to pass the swing bridge. In Dziwnów, you can either moor directly at the pontoons in the Wybrzeże Kościuszkowskie city quay or, a little further on, behind the drawbridge, on the east shore in the distinctive, semi-circular Yacht Harbour Dziwnów. 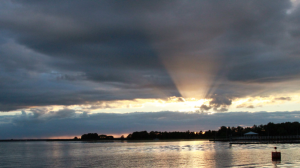 From Dziwnów, the route leads back south towards Wolin via the River Dziwna. The Wolin Marina is located opposite the old Slavic and Viking settlements on the island of Wyspa Ostrów in the River Dziwna opposite the harbour. Once a year at the beginning of August, you can enjoy the Viking Festival – one of the biggest medieval spectacles in Europe.

Instead of taking the Piast Canal (Kanał Piastowski), you can also alternatively reach Świnoujście via the River Old Świna (Stara Świna). Starting from Wolin, you first take the Szczecin Lagoon fairway. The route then heads north and turns into the Stara Świna. Passing creeks, and small and large islands such as Krasibór, the river then hits the Świna, which in turn leads into the Baltic Sea. The morning hours are particularly impressive when entering the canal from the Szczecin Lagoon. But the journey through the labyrinth of channels via the Stara Świna is almost meditative and provides an alternative to the Piast Canal. It is 8 nm long, provided you are able to pass under the static bridge (clearance height 4.5m) between the island of Wolin and the Mielinek Peninsula to make your way back into the Świna.

To get from Świnoujście to Ueckermünde, choose the Piast Canal along the Świna, enter the fairway and cross the Szczecin Lagoon. Upon entering Ueckermünde, you will find the two harbours: the modern and newly-built Marina Lagunenstadt Ueckermünde, which lies right at the mouth of the Uecker at the lagoon and the Ueckermünde city harbour. Approximately a further 1.3 nautical miles gets you to the Citymarina, where it is easy to moor along the quay wall. The pretty market square in the centre is within walking distance. The Museum of the Lagoon, which is housed in the castle of the Pomeranian Dukes (1284), is worth visiting. The Roter Butt restaurant in Bollwerk offers pleasing views over the Uecker. 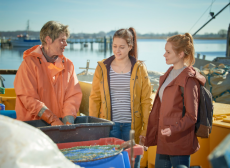 The fairway to Freest branches off to the west from the Peenestrom. You will pass two bridges, the Zecherin Bridge and the Peene Bridge (Wolgast). The protected Freest Marina lies on a small bay Peenestrom feeds into the Greifswald Bodden. The village is known for its traditional Fishing Festival,
which normally takes place on the first weekend of August.

Via the Greifswald Bodden and Greifswald-Wieck, we return over the River Ryck to the harbour of the Greifswald Yacht Centre. The Hanseatic and university town of Greifswald is full of things to see, such as the market square and the museum harbour. For the farewell dinner, we recommend making a stop at the Hornfischbar Pomeria on the floating restaurant or in the Tischlerei restaurant, right in the marina.