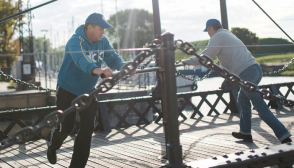 The Smiltynė Yacht Club is located at the northern tip of the Curonian Spit National Park. The club is on the other side of the Curonian Lagoon. The fairway from Smiltynė up to Juodkrantė and further on to Nida is buoyed. Attention: passage between the mainland and the island of Kiaulès Nugaros is not permitted. You can make a short stop at the jetty at Juodkrantė. In the event of strong north-easterly winds, caution is advised when mooring, as the wind blows directly onto the unprotected jetty.

With 720 inhabitants, it is the second largest settlement on the Curonian Spit. Close to Juodkrantė is the 40-metre high witch hill dune. Today, there are more than 25 oak sculptures here, which find their origins in Lithuanian fairy tales and are carved into the wood by Jonas Stanius.

The last third of the route to Nida leads past the dunes of the Curonian Spit. It is a unique natural experience.

Nida itself has developed into a lively seaside resort in the unique natural environment of dunes and forest. Thomas Mann spent three summers in his summer house on the hill at Usava. A visit to this museum overlooking the Curonian Lagoon is worthwhile.

The Kurenkahn was originally used as a fishing and transport boat. The name has a geographical origin as well as a connection to the Kuren tribe, the spit’s namesake. The boat is made of wood and has a particularly flat bottom with a draught of around 40 cm. This meant that the boats were not dependent on harbours and could moor at the shore for loading and unloading without encountering any problems. Generally speaking, the barges used sails, as fishing under engine power was forbidden on the Curonian Lagoon. Using traditional methods, Vaidotas Bliudžius has reconstructed the Kurenkahn (Kurėnas) in Dreverna and hires it out as an excursion boat. The Ethnographic Museum in Dreverna of the boat builder, Jonas Giza, shows, among other things, how the boats were built. 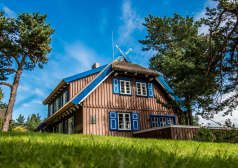 The old market square and the Evangelical Lutheran Church with its frescoes show Šilutė’s history.

There are wonderful views of the harbour from the Heydekrug restaurant terraces. The maximum depth here is 1.5 to 1.8 metres, so it is only suitable for smaller boats. It is, however, absolutely necessary to check the current depth of the waterways and harbours before starting out on your trip.

Before turning into the River Minija on the way to Mingė, you pass the village of Uostadvaris, on the northern edge of the island of Rusnė. On the left side of the River Atmata, you can moor at a small harbour with a depth of 1.6 to 1.8 metres and a tendency towards severe silting at the edges. It should therefore be approached at a 90° angle from the middle of the river. Uostadvaris is famous for its octagonal lighthouse with a height of 18 metres. From an outdoor platform, there are spectacular views of the natural landscape of the Nemunas Delta.

To reach Mingė from Uostadvaris, cross the River Atmata and turn into the Minija, which has its source in the Lithuanian highlands and has a gradient of 180 metres over its length of 213 kilometres. The Minija flows into the Atmata, the northern – most estuary of the Nemunas Delta. Shortly after the corner of Windenburg (Ventė) it flows into the Curonian Lagoon. Mingė is also called the Venice of Lithuania because of its location on the water – many houses have been built on the right and left banks of the river. At a depth of 2.4 to 3 metres, the Minjė is also navigable for larger boats without problems – at least until Mingė. Further navigation northwards may be hindered by a 9-metre high overhead line. The fish restaurant at Kintai Mėlynasis Karpis is highly recommended. You can moor directly by boat here.

The way back to Klaipėda through the Curonian Lagoon can be shortened by means of a stop in Dreverna, provided your boat is able to navigate a shallow water depth of 1.2 metres. To do this you have to cross the mouth of the Atmata and return to the Curonian Lagoon in the fairway. At Juodkrantė, you follow the buoyed fairway of the ferry to Dreverna.

Even in the small, tranquil harbour, the maximum water depth is only 1.2 metres. In the event of strong wind conditions, you can circumvent the Curonian Lagoon by using the Wilhlem’s Channel (König-Wilhelm-Kanal), which was built in 1873 as an inland waterway from Mingė to Deverna and Klaipėda. It is currently only partially open for small vessels.

The Port Dreverna restaurant is famous for its delicious fish soup. It is located right in the harbour. You can also visit the observation tower and stay overnight in the cabin houses.

From Dreverna, you continue via Juodkrantė along the fairway back north to Klaipėda. The destination is the Castle Harbour of Klaipėda in the centre of the city. The harbour is located at the mouth of the River which flows into the Nemanus.

To enter the moat, which is also the harbour basin, you have to pass the swing bridge, which is manually opened every hour.

Along the banks of the River Danė, Lithuania’s oldest city has numerous pubs, restaurants and cafés. The Herkus Kantas sailing club with its local beer and small dishes is a must.

From Klaipėda, you navigate the short distance to Smiltynė Yacht Club. To enter the Klaipėda Castle Harbour you have to pass the manually operated swing bridge, which opens every hour for 30 minutes. Berths along the River Danė are also available.

The river promenade leads to the ferry dock. On the way, you can stop at the Nerija restaurant, just before the ferry pier.

On the terrace of the Smiltynė Yacht Club restaurant, you can conveniently end your trip with a view of the ships passing by.