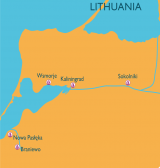 The Kaliningrad Region is the westernmost region of the Russian Federation. As a Russian enclave with a tase for Europe, it is not connected to the motherland but borders the EU states of Poland and Lithuania. North of the capital, Kaliningrad, the Curonian Spit separates the lagoon of the same name from the Baltic Sea.

It is not possible to reach Kaliningrad by sea without any border formalities. Coming from the Baltic Sea, a visa is required to cross the only checkpoint at Baltijsk (Pillau).

But times are changing and access to the region will be much easier in the future. “From 1st July 2019, tourists will be able to apply for their visas electronically. This will apply for an eight day stay in the Kaliningrad region,” explains Aleksei Ingatev, advisor to the Governor of Kaliningrad Region for Regional Development and International Cooperation. The fact that there is a great interest from international boaters is supported by Russia’s decision to “open the inland waterways to boat traffic and to allow boats with an international flag to use them”, continues Ignatev.

Until now, the bilateral agreement between Lithuania and Russia has only allowed boats flying Lithuanian, Russian and Polish flags to sail on the Russian part of the Curonian Lagoon. Were the waters to be opened up to boats flying other flags, a whole new exciting area for boating would allow week-long trips through the region. In addition, great potential would arise for chartered tours. After the opening, there will be a direct connection via the River Pregolya, which flows behind Kaliningrad into the Vistula Lagoon and then into the Baltic Sea, via the other side upstream via the River Deime (Deima) and the Polesski Kanal and into the Curonian Lagoon. The Pregolya is navigable over the whole section.

Much potential in the region Coming from the Baltic Sea and following the 20 nautical miles long Kaliningrad Sea Canal, boaters encounter the first obstacle shortly before reaching their destination – the road and rail lift bridge in Kaliningrad (clearance height closed: 3.5 m, opening hours unknown). A procedure for regular bridge openings is not on the horizon.

Only boats with a low height can pass here. In Kaliningrad, and after the city area on the Old and New Pregolya, further bridges follow, which, with their lowest heights of 4.5 metres should not be an obstacle for motorboats. The water depth in the wider Pregolya area near Gwardeisk, where the Deima River branches off, is 2 metres. As a result of continuous westerly winds, quantities of water from the Baltic Sea and the Vistula Lagoon are driven into the Pregolya River. This causes the water to rise sharply and it is then particularly deep near the estuary, where the water level can vary by up to 3 metres. This means boaters need to be constantly aware of the maximum draught and the maximum clearance.

“At present, Russian inland waters can only be navigated with a skipper. This is certainly one of the reasons why not many tourists travel by boat into the Pregolya Delta. We are working hard to ensure that this will change in the future,” says Ignatev. It would be a dream if boaters could travel via the Pregolya and Deima to the Curonian Lagoon. But this will also require investment in infrastructure to ensure higher clearances and options for opening many of the bridges.

A trip from Kaliningrad through the Pregolya Delta upstream to Langendorf (Sokolniki) is already possible at present and is more than worth it. Langendorf Castle lies about 17 nautical miles upstream. It once belonged to the ancient Prussian Perbandt family, who settled here on the banks before the German Knights Templar.

When history returns to the future 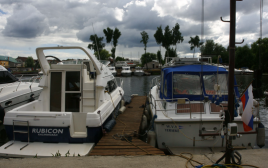 The old manor house is now again alive in all its glory. The current owner, Eduard Voronezkij, has restored everything carefully and tastefully and has turned it into a hotel complex. For boaters, he has also built a small harbour for a maximum of 20 boats, which is only suitable for motorboats up to 1.8 m due to the shallow water depth.

Slowly, the region is awaking from its decade-long sleep. New harbours are being built and in Kaliningrad many projects are being actively planned, such as the Wolna Yacht Club. If you want to explore this area by boat, there are a few charter possibilities, but it is only possible to navigate the Russian inland waters with a local skipper. Should this one day change, there will be a completely new and indispensable area to explore.