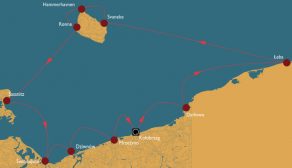 From the seaside resort of Kołobrzeg, the largest on the Polish coast, the tour leads eastwards and always along the coast. Past the lighthouse at Fort Münde, the 26-metre high city landmark on the right bank of the Persante, the route heads out onto the open sea. The route leads eastward along the coast and you can enjoy the open sea up to Darłowo. In the event of north-westerly winds of 6 or more on the Beaufort scale, these can create uncomfortable cruising conditions when entering the Wieperza to reach the Darłowo Port or when using the mooring facilities at the Usteckie quay; both on the eastern shore of the Wieprza. The shifting bridge to the entrance opens hourly. The bridgekeeper‘s cottage has a futuristic appearance. Not far from the pedestrian bridge, fresh fish is available directly from the fishing boats along the western quay. 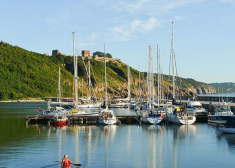 Before leaving, you should inform yourself with regard to the current transit times for the restricted area Number 6/6b between Darłowo and Ustka. The harbour master in Darłowo will provide you with this information. Shortly behind the restricted area is Łeba. The marina is sheltered on the western side of the River Łeba. The long Baltic Sea beach is only 200 metres away behind the protective pine forest. The highlight of Łeba is the shifting dune area of the Słowinski National Park, which has been included in the list of UNESCO World Biosphere Reserves. It is situated between the sea and Lake Łebsko. The Hotel Castle Neptun, which was the backdrop for the film adaptation of the novel by Theodor Fontane, „Effie Briest“, is situated right by the beach. The location is truly unique.

After the long stretch over the sometimes rough Baltic Sea, the cosy harbour of Svaneke on Bornholm is just perfect; you are well protected here, especially when there are westerly winds.

After the long stretch over the sometimes rough Baltic Sea, the cosy harbour of Svaneke on Bornholm is just perfect; you are well protected here, especially when there are westerly winds.This small fishing village was voted the most beautiful small town in Denmark in 2013. Strolling through the village with its coloured houses, ceramic, glass and textile factories and galleries, small bakeries and the sweet and liquorice factories will tempt you to stay a little longer.

The route first passes the rugged coast of the northeast on the east side of Bornholm. The destination, however, is the harbour in Hammerhavn on the western side. The scenery of the former granite harbour is unique and the harbour lies at the foot of Europe’s largest castle ruin: the Hammershus. During the day, the ruin, which lies south of the harbour, is a good landmark. Strong currents from the northwest during storms or onshore winds can, however, make it dangerous to call at the harbour. The island’s longest zipwire, the Deadslide, is to be found on the rock faces of the nearby quarry. From its summit, it descends down 290 metres to the small lake Opalsøen. The adrenalin rush at 55 km/h lasts for about 20 seconds.

The stage from Hammerhavn to Rønne leads past Hasle with its distinctive harbour swimming pool. The coastline leading to Rønne is characterised by sandy beaches. The beach by the bay of Nørrekås Marina is located right next to the harbour. We can also recommend the Green Solution House restaurant.

The route from Rønne to Sassnitz is planned as a day trip and leads across the open sea. The Sassnitz fairway starts about half a nautical mile south of the pier head. The pier at Sassnitz is 2.6 kilometres long, making it the longest in the entire Baltic Sea. The harbour is easy to approach, even in heavy weather.

The resort has a lot to offer: a lighthouse, pier, the H.M.S. Otus submarine museum, the baths architecture in the pretty old town. You can enjoy all these and then see an evening out in the East Prussian harbour smokehouse by the harbour.

The harbour day in Sassnitz can be used well for a detour to the Jasmund National Park where the wild forest by the sea borders the chalk cliffs. The ancient beech forests belong to the UNESCO World Natural Heritage Site. 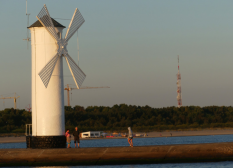 Via the Prorer Wiek, the journey heads south along the east coast of Rügen towards the outer coast of Usedom. Especially off the Thiessow Peninsula, you have to watch out for gillnets, so steer clear of the coast and head for the Świnoujście fairway. At the western side of the pier head, at the mouth of
the Świna into the Baltic Sea, the mill beacon acts as landmark for Świnoujście. In Świnoujście, it’s best to moor in the Yacht Port North Basin on the western side of the Świna, which flows into the Baltic Sea here.

Now it’s off to the island of Usedom, where 100 years ago bathing tourism made its debut and 2,000 hours of sunshine are guaranteed. The best way to explore the nearby seaside resorts is by (rental) bike along the promenade and through the coastal forest: Świnoujście, Ahlbeck, Heringsdorf and Bansin are all along the route. Those who make it will get as far as Koserow, Zinnowitz and Karlshagen.

From Świnoujście, the route continues along the outer coast towards Dziwnów, the place between river and sea. Coming from the sea, you head towards Buoy DZ1 and then for the mouth of the River Dziwna.

The distinctive semi-circular harbour is located on the eastern bank. Due to its fine, sandy beach, Dziwnów is a tourist magnet for the Polish and is equipped with a comprehensive tourist infrastructure.

The entrance to Mrzeżyno, where the River Rega flows into the Baltic Sea, is only recommended in favourable weather with the wind being less than 7 on the Beaufort scale, as the entrance is difficult (for alternatives, see above). The two beacons, red and green, point the way. In any case, you should stay closer to the green beacon, as there is a sandbank with very shallow water on the eastern side. If the wind is strong, you should avoid this harbour as a cross current makes the entrance even more difficult. Mrzeżyno, which belongs to the rural municipality of Trzebiatów, is a fishing village and a holiday resort with a long, clean sandy beach and an extraordinary micro-climate. From here, the last canoe berth before the Baltic Sea, there is also a 15-km long canoe route to Trzebiatów.

The route then continues back to the harbour of departure at the Marina Solna in Kołoberzeg. The harbour is home to the Sailor Bar with its terrace and views over the River Parsęta and Baltic Sea estuary. There is also a beautiful beer garden in the Morast-Redoute (fortress) in the harbour.