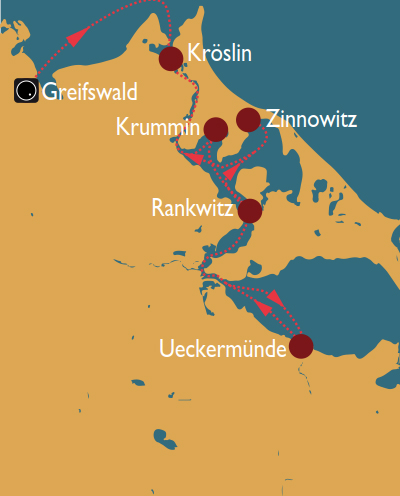 This tour starts in the University and Hanseatic City of Greifswald. After leaving the Greifswalder Yachtzentrums 2 nautical miles, pass the manually-operated wooden bascule bridge in Wieck and the barrage is then visible in the distance.

the Danish Wiek. Boaters should pay special attention to the many gillnets that are laid out here on the Gahlkower Haken. South of the fairway buoys, on the Freesendorfer Haken, it is quite shallow. Passing Freest on the western bank and Peenemünde on the eastern side of the Peenestrom, you reach the Peene Bridge (Wolgast). Having passed this, you continue to follow the buoyed fairway. At Ziemitz, on the south coast of the Wolgaster Ort Peninsula, it is very shallow to both the right and left of the fairway. You then turn into the Krumminer Wiek. The Naturhafen Krummin is located at the northern end of the Wiek, on the island of Usedom.  Theatre performances, music and barbecue evenings take place in the harbour in summer. The Café Naschkatze in the village is a good tip

From Krummin From Krummin, it is 15 nautical miles to the Zecherin Bridge. It opens three times a day. Immediately after the bridge, it’s a good idea to stick to the buoys within of the narrow fairway. Next up is the Karnin vertival-lift Bridge, an industrial monument. It is the middle part of a former railway bridge whose island and mainland bridge sections were blown up. The view then opens up onto the Small Sczcecin Lagoon. After the Peenestrom South H1 buoy, you can head south towards the mouth of the River Uecker. There are two harbours in Ueckermünde to choose from: the Marina Lagunenstadt Ueckermünde, right at the mouth of the Uecker, and the Stadthafen Ueckermünde, where you moor at the quay wall. From here, the centre with its beautiful market place is within walking distance. In the evening the excellent Roter Butt is worth a visit.

On the way back, the route again leads via the River Uecker into the Small Szczecin Lagoon and in a westerly direction back into the Peenestrom. North of the Zecheriner Bridge – on the Lieper Winkel Peninsula between Peenestrom and Achterwasser – lies the small and cosy harbour of Rankwitz. Easterly winds make this a well-protected location. There is a wide view onto the Peenestrom and the sunsets are spectacular. Right next to the harbour office is the Zur Alten Fischräucherei, a smoked fish restaurant.

The next stage of the route passes the Lieper Winkel Peninsula; at buoy PN 76, you can enter the Achterwasser between Lieper Winkel and the Gnitz peninsula. It is essential here to pay attention to the shallows marked by cardinal buoys and to steer clear of the island of Görmitz. Up to Zinnowitz, the fairway is unbuoyed, meaning that the approach is only recommended during the day. The water depths should be checked on the way to the modernised harbour in Zinnowitz on Usedom which has an indicated water depth of 2 to 2.5 metres.

On the way to the day’s destination in Kröslin, you follow again the Peenestrom fairway. To pass the waiting times, you can moor in the city harbour of Wolgast and take a walk through the old town. In the Café Biedenweg, you will find delicious pastries and chocolates from the master confectioner. On the western bank of the River Peene, 5 nautical miles after the bridge, the 5-Sterne-Marina Kröslin im Baltic Sea Resort in the Baltic Sea Resort hoves into view.  There is a regular ferry connection between Peenemünde and Freest from the harbour. In Peenemünde, the Historical Technical Museum offers information about the history of the largest military research centre in Europe which was once located here.

Thanks to its beach and fresh fish, the small fishing village of Freest is very popular with visitors and locals alike. The evening you can end in the STEGhouse harbour restaurant of the Baltic Sea Resort.

After passing the Wiecker Bridge and about 5 kilometres along the River Ryck, the route returns to the harbour of the Greifswald Yacht Centre via the Greifswalder Bodden and the Danish Wiek. You can refuel your charter boat at the filling station west of the harbour basin. For a farewell dinner, we recommend the Hornfischbar Pomeria on the floating restaurant or the Restaurant Tischlerei directly on the marina.