It is not without reason that the island, with its many harbours and picturesque landscapes, is also called the “Pearl of the Baltic Sea”. Denmark’s easternmost municipality lies about 48 nautical miles north-east of Rügen between the historic southern Swedish province of Skåne and Poland.

The coastline with its varied landscapes is 140 kilometres long. While the main draw of the south is its white, sandy beaches, the north is characterised by deep, rocky gorges and steep cliffs. The highest of these rise over 40 metres above the sea. 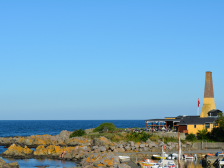 In recent years, Bornholm has also developed into a paradise for gourmet diners from all over the world. Simple smokehouses process fresh fish of excellent

Bornholm is also interesting for boaters because there is always a calm side to the island to be reached. If, for example, the wind is coming in from the south-west, you will be guaranteed to find a quiet spot on the north-east coast.