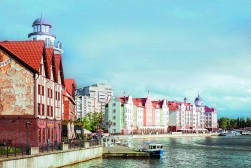 “We consider ourselves Europeans while we are part of Russia. We are closely connected with European history which is still alive and palpable. Our region is formed by its unique nature, the Curonian split and the sandy beaches along the outer coast. Only few have seen the wild landscapes along the Pregolya river. And we are the amber capital of the Baltic Sea region! Kaliningrad will be one of the venues for the FIFA 2018 World Cup – a real boost for the people in the region and the city to incorporate European dimensions even more in their mind-set and in their daily lives.”
Aleksei Ignatiev, Development Director of the Kaliningrad Regional Economic Development Agency, the Advisor to the Governor of the Kaliningrad Region on Regional Development and International Cooperation

The Russian region of Kaliningrad (Kaliningrad Oblast), with its capital of the same name, is the westernmost territory of the Russian Federation and remote from the motherland. Those who wish to leave the exclave for Russia have to cross through two countries: Lithuania and Belarus. Bordering on the south is Poland (Warmia-Mazury region).
The former Königsberg is not only a transportation hub, but also an economic and cultural centre with universities, research institutes, theatres and museums as well as the gateway to an impressive landscape. The 98-kilometre-long Curonian Spit peninsula on the north coast of the Sambia Peninsula was named a UNESCO World Natural Heritage Site. The largely untouched natural landscape is characterized by vast bird sanctuaries, idyllic hamlets and especially huge shifting dunes that once constantly buried communities.

On the western parts of Kaliningrad region, it is worth visiting the valley of the Pregola (Pregolya) river just before it flows into the Baltic Sea through the Vistula Lagoon. There you can find  an epic river landscape. In Kaliningrad there are several cultural highlights which shouldn’t be missed: Immanuel Kant’s grave, the impressive cathedral and spectacular museum ships. The new Kaliningrad Stadium will be one of the venues for the 2018 FIFA World Cup. This will be also the kick-off for the future European metropolis.

Highlights of the region:
• Kaliningrad (Königsberg) with King’s Gate and Dome
• Burial site of Immanuel Kant
• World Ocean Museum
• Amber Museum
• Amalienau
• Coastal resorts of Jantarnyj, Zielenogradsk, and Swetlogorsk
• The Russian side of the Curonian Split with the National Park