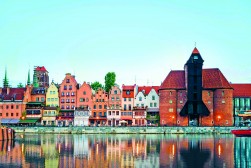 “Pomorskie is a region full of contrasts: a boat ride along the “Zulawy Loop” (“Pętla Żuławska”) is like as meditation on the waves. Calm water, untouched nature and subtle landscapes are pure relaxation. But on the outer waters along the Gulf of Gdańsk you find boating hotspots with nightlife, a young scene and vivid culture life. These contrasts describe Pomerania at its best.” Grzegorz Walczukiewicz, Director of the Office of the Association of Sea Cities and Municipalities

The Pomeranian graded shoreline stretches eastward from Ustka (Stolpmünde) where lagoons such as Jezioro Łebsko (Lake Łebsko) have formed. There, where the Mierzeja Helska (Hel Peninsula) stretches far into the Baltic Sea is where the Zatoka Gdańska (Gulf of Gdańsk) opens up. In its southern end, the 70-kilometre-long and only about two-kilometrewide headland of Mierzeja Wiślana (Vistula Spit) separates the Zalew Wiślany (Vistula Lagoon) from the Baltic Sea.

On the south coast of the Vistula Lagoon a few small harbours are well worth a visit. A special highlight of the Pomorskie region is the Pętla Żuławska (the “Zulawy Loop” in the Vistula Delta). Its canals and rivers enable boats to cross through from the Gulf of Gdańsk to the Vistula Lagoon. Boating tourists can enjoy a relaxed sailing tour from sight to sight in this part of Poland. Additionally, different round trips in various lengths are possible through the Vistula Delta.