130 square meters of water destination, the southern shores of the Baltic Sea on the Allt för sjön in Stockholm

The marketing initiative SOUTH COAST BALTIC presented itself in March on the Allt för sjön in Stockholm for the first time to the Swedish public. With a total of 329 exhibitors and 79,246 visitors, it is Sweden’s leading water sports exhibition.

In Sweden, the joint presence of SOUTH COAST BALTIC was set under the slogan The other side of the Baltic Sea. All participating project partners of the regions Vorpommern (D), Bornholm (DK), West Pomeranian and Pomeranian (PL), Klaipeda (LT) and Kaliningrad (RU) inform the Swedish boaters about the attractiveness of the southern shores of the BALTIC Sea. Just in time for the fair, the harbour guide and the two magazines of SOUTH COAT BALTIC as well as some regional brochures in Swedish language were completed.

“The German boaters rather undertake day trips of 30 to 40 nautical miles. The Swedes, however, live the Viking gene further on: They cruise some day on their boat before they reach a safe harbour. We had assumed that the Swedish boaters were more likely to come from Stockholm via Bornholm to Western Pomerania because of the long distance. But that is by no means the case, “commented Jens Masuch after the successful kickoff in Sweden.

In addition to a well-attended media meeting with numerous representatives of the Swedish water sports leading media, a Bornholm meeting at the stand, SOUTH COAST BALTIC had lso held also a number of presentations carried out on the stage of the Sailforum organized by the National Sailing and Yachting Association Svenska Kryssarklubben. With its 42,000 members, the association is one of the largest association for cruising boaters in the world. 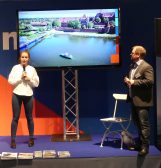 “It was a great honor for us in front of the biggest sailing club of its kind to be able to introduce the other side of the Baltic Sea with its highlights. The demand for the SOUTH COAST BALTIC information materials was enormous here as well as at the stand. The high quality has spread quickly among the trade fair visitors, ” Masuch continued.

manufactory Korbwerk from Heringsdorf and taste delicious sweets from Lithuania and salmon and local sausages and cheese specialties from Bornholm. This was gladly accepted by the Swedish public.

The Stockholm Fair concludes an intense and successful fair season for SOUTH COAST BALTIC, before setting sails for the upcoming season. 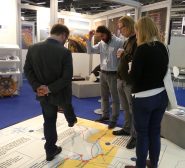 gion and also the regional brochures which are produced for and distributed during the boot 2018 in Düsseldorf, the Wiatr i Woda in Warsaw and at least on the Allt för sjön in Stockholm in the respective on the national languages German, Polish and Swedish and also English.

Particularly popular was the revised edition of the harbour guide for the Southern shores of the Baltic Sea.

About SOUTH COAST BALTIC
SOUTH COAST BALTIC is a marketing initiative under which 14 regional tourism associations and marina operators from Germany (Western Pomerania), Denmark (Bornholm), Poland (Zachodniopomorskie, Pomorskie), Lithuania (Klaipėda region) and Russia (Kaliningrad region) have joined forces to promote the unique water sports area of the southern shores of the Baltic Sea. The landscape is characterized by an epic nature, living history and culture, endless beaches, unique lagoon- and river landscapes and warm hospitality. The range of safe marinas covers the entire spectrum: from small, familiar and cozy harbours up to large five-star marinas.