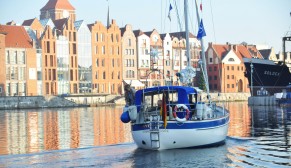 rketing initiative SOUTH COAST BALTIC at this year´s boot in Düsseldorf presents the program of the boating rally, which will take place for the third time. The international flotilla will start in Gdańsk on 23rd June 2018 and is expected to arrive in Lithuania’s Klaipėda on 29th June. For football fans, the stopover in the World Cup city of Kaliningrad on 25th June should be particularly appealing. The Spanish team, one of the tournament favorites is on the pitch in the evening to complete the preliminary round match against Morocco.

Together with its partners in Gdansk, Kaliningrad and Klaipėda, SOUTH COAST BALTIC is again offering an attractive package to flotilla participants. Whether owner or charterer, all can participate in the voyage for free. The berths are free of charge and a land bared program will also be offered. Entrance to the Russian Kaliningrad exclave requires a visa.

A new edition of the SOUTH COAST BALTIC harbour guide with more than 180 ports along the southern Baltic Sea coast will also be presented. The informative guide has been extended to the Danish island of Bornholm, funded by the European Union, it is available free of charge at the booth of SOUTH COAST BALTIC, Hall 14 C22. Next to it lies the new magazine SOUTH COAST BALTIC. With background stories and many tips from locals, it brings its readers closer to the colorful life and the friendly people of the south-eastern shores of the Baltic Sea.

Terms and Conditions for the SOUTH COAST BALTIC Boating Rally 2018
Participation is free of charge and includes berths in Gdańsk, Kaliningrad and Klaipėda. For entry and exit to Russia a visa is required. Depending on the urgency, it costs between 70 and 130 euros and has to be paid and applied by the participants themselves. SOUTH COAST BALTIC and German agencies help with the procedure Formal registration is possible by e-mail at: mail@ga-ma.de until 30th April 30, 2018. The number of participants is limited.
Of course, the employees of SOUTH COAST BALTIC can also inform you at the boot 2018 in Düsseldorf (Hall 14, Stand C22).