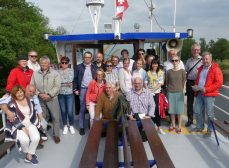 The main focus of the remaining project duration is on the development of charter brochures for motor and sailing boats and a comprehensive charter portal in order to achieve a strong online presence. The trade fair activities in Germany, Poland, Sweden and Denmark will also be continued.

For the development of a high-quality destination for boaters, training of the marina personnel and the expansion of services in the harbours remain on the agenda.

The aim is to continuously increase the number of guest boaters in the region and to stabilize their numbers on a higher level.

Where is Kąty Rybackie? This question was asked by some of the partners until they learned during a 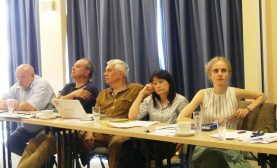 short study trip that this is a small village with 707 inhabitants at the foot of the Vistula Spit, between Vistula Lagoon and the Baltic Sea. The meeting of the partners also took place there.

Pine forests, the long fine sandy Baltic Sea beach and a unique nature along the Pętla Żuławska boating region in the Vistula Delta are the attractions for many tourists.

The port of Rybina was the starting point to get a first impression of the canal and river landscapes of this area by boat. Birds breed on the shores, a few boats swing on sleepy jetties, fishermen stand on bascule bridges and otherwise a motorboat chugs past from time to time. This area could also be described as undiscovered. At least with the German motorboat drivers. So there is still a lot to discover.