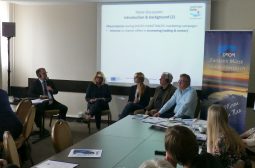 On 15 May 2018, 60 participants from Germany, Lithuania, Denmark and Poland met for the third international “Marina Quality Forum” in Gdańsk to exchange views on the latest developments in the water sports industry. Also present were marina operators and water tourism stakeholders including representatives from the municipalities. The Association of Sea Cities and Municipalities in Poland (ZMiGM) from Gdańsk had invited to this event as part of the marketing initiative SOUTH COAST BALTIC.

Topics on the agenda included the development of the marina network in the Pomorskie region, in particular along the Żuławy Loop (Pętla Żuławska) and the Gdansk Bay, the current challenges for marinas against the background of demographic developments and the creation of more charter possibilities along the southern shores of the Baltic.

“We are particularly pleased with the positive development of the Żuławy Loop, which attracted more than 500,000 visitors in the last five years. More than 200,000 of them were boaters and water sports enthusiasts”, says Rafał Wasil of the Marshal’s Office of the Pomorskie Voivodship. A total of 76 ports and moorings, 47 of which have been modernised in the last five years, are located in the Pomerania region. The infrastructure for the water sports industry will continue to be expanded in the future. “A major challenge is to ensure 100% navigability of the waterways. At present, these are still partially hindered by power lines or fixed bridges with insufficient height,” Wasil explains the plans for the future. In addition to the expansion of 10 marinas in the Żuławy Loop , the expansion of six marinas in the Gdansk Bay is planned.

“The Pomorskie region, in the centre of the southern shore of the Baltic, is becoming a hotspot for boaters. We have safe harbours and interesting cities along the coast that are well worth a visit,” says Grzegorz Walczukiewicz, Director of the office of the Association of Sea Cities and Municipalities and partner of SOUTH COAST BALTIC from his own experience.

During the forum there was also a panel discussion on “Expansion of charter possibilities on the southern shores of the Baltic” with experts from the charter industry, including Daniel Dziwulski from BALTICA Yachts & Charter, Michał Górski from the harbour network Pętla Žuławska and Aleksandra Łapko from the Maritime University in Szczecin.

Everyone agreed that the charter offer for motor and sailing boats on the southern Baltic Sea coast urgently need to be expanded. The demand for charter boats – as was evident at previous boat shows – is enormous. Especially German sailors and boaters are looking for new, easily accessible starting points for their 1-2-week and sometimes only 3-day lasting cruises in order to be able to explore further parts of the SOUTH COAST BALTIC, like Gdansk Bay or the Curonian Lagoon of the area without a long journey.

“Boaters inform themselves via the Internet. They plan their sailing possibilities in advance and take a close look at the boats they intend to charter. An excellent, informative website, preferably with a booking function, is therefore indispensable for charter companies”, says Daniel Dziwulski of BALTICA Yachts & Charter with charter bases in Świnoujście, Kołobrzeg and Gdynia.
This is also where SOUTH COAST BALTIC comes in. In addition to charter boat brochures for motor and sailing boats, a charter portal will go online, which will present charter offers of the southern Baltic Sea coast in summary and develop in cooperation with existing charter companies.

Besides those who do not own a boat, the group of boat owners is another important target group of the SOUTH COAST BALTIC marketing initiative. However, the demographic development of boaters cannot be stopped: especially the boat owners from Germany are getting older and older. The operators of marinas are called upon to adapt their offer to the needs of these boaters. From 2025 at the latest, the group of 61 to 75 year-olds will make up the majority in German ports. But the boats are also getting bigger. More comfort and safety is also in demand with families with children, regardless of the age of the charterer. 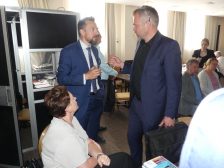 “High comfort, safety and accessibility are topics that are not only important for older boaters, but also play a role in equipping marinas for all boaters,” says Björn Gabler, project coordinator of GA-MA Consulting GmbH. “Boaters stay longer in the marinas, only leave when the weather is perfect. This means that you make greater use of the tourist facilities in the vicinity of the marina. A modern marina must also take this into account,” continues Gabler.

The Maritime University in Szczecin is developing a block course for marina operators and personnel in order to train marina personnel in this area and to make them aware of customer needs. “For three days, the topics will be marketing and management of a marina, the infrastructure and also technical and practical topics,” says Aleksandra Łapko, who developed the course concept and invited the participants to take part in the course at the end of November.

So there is a lot to be done to promote the southern coast of the Baltic Sea. “In addition to the regional brochures and the two multilingual issues of our magazine, there will be a new edition of the Harbour Guide next year,” says Jens Masuch, coordinator of the SOUTH COAST BALTIC marketing initiative, looking to the future. In addition, trade fair appearances in Poland, Germany, Sweden and Denmark, family trips with journalists and charter companies as well as club visits in the individual countries are planned.

“Not to forget our highlight, the South Coast Baltic Boating Rally 2018, which starts on 23. 06. in Gdansk and ends after a stop in Kaliningrad on 29.06. in Klaipeda in Lithuania. The rally is fully booked with over 20 participating boats. We hope that the beauty of the region will spread among the boaters,” says Marta Czarnecka-Gallas, project coordinator for SOUTH COAST BALTIC at ZMiGM.

The goals of SOUTH COAST BALTIC are ambitious. After all, 20% more boaters are to come to the southern Baltic coast. Surveys among the boaters in the harbours and at the trade fairs, which were led by the Technical University in Gdańsk, have already shown initial success.